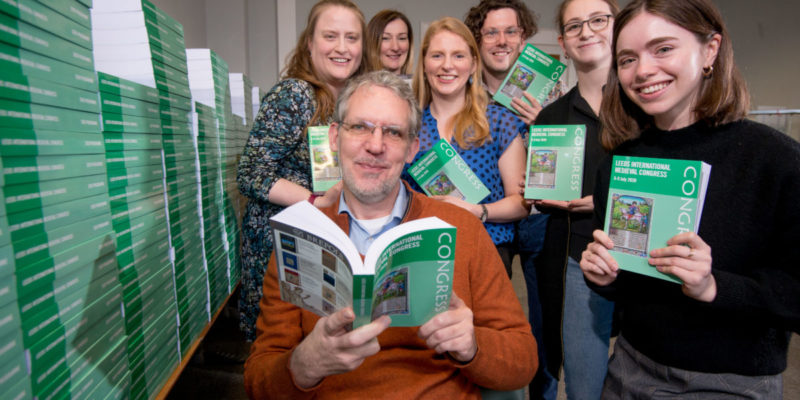 As the distant thud of green books through letterboxes begins to sound around the world, let us proudly present the 27th International Medieval Congress programme.

This year’s programme introduces the special thematic strand of Borders, with medievalists gathering at the University of Leeds on the 5-9 July 2020, to meet and share their research. The Borders strand has been expertly co-ordinated by Nora Berend (Faculty of History / St Catharine’s College, University of Cambridge), and aims to encourage varied and interdisciplinary approaches to the field of medievalism.

Over 2,700 participants will be actively involved in the academic programme, featuring a total of 830 sessions and round table discussions.

A number of special lectures will interpret the Borders theme, including the customary Early Modern Europe lecture, this year delivered by Jinty Nelson (King’s College London) and the Medieval Academy of America annual lecture series presented by Carol Symes (University of Illinois, Urbana-Champaign). Papers will cover everything from co-habitation in Iberian Medieval Towns to the textual boundaries of medieval sources.

The events and excursions schedule is as jam-packed as ever, with workshops, film-screenings, concerts, and performances to keep everyone busy. Delegates may choose to learn sword-fighting, jewellery-making or book-binding before dropping in on a story performance by Rachel Rose Reid or a medieval music concert by Silvan Wagner. Joglaresa, described by the Times as ‘thrilling and haunting’, will also take the stage for one night only, performing a medley of Iberian song.

Excursions will visit notable religious sites such as Rievaulx Abbey and Durham Cathedral as well as more central locations including the Royal Armouries and Leeds City Centre (in the form of an owl-themed walking tour!).

After popular suggestion, the Post-Congress Tour will finally journey to Scotland. Robert C. Woosnam Savage and Kelly DeVries will lead a five day tour of the castles and battlefields of central Scotland, with over 15 sites scheduled! We recommend that those interested book early to avoid disappointment.

So have a browse and begin to plan your congress week and – if you finish that – why not start planning for next year? We can excitedly reveal that IMC2021 will focus on the special thematic strand of ‘Climates’, with the proposal form opening in May 2020.

We look forward to seeing you in July!